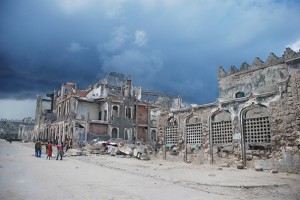 The shadow of Somalia had been stretching across the fragile economies of the horn of Africa for many years. Most international efforts to improve the situation had been short-termist or limited in nature and all previous initiatives to re-establish the State had been thwarted. TOR was requested to present to the Council of Ministers of The Intergovernmental Authority on Development in the Horn of Africa (IGAD) a blueprint for the rehabilitation of the State.

After 5 months of information gathering, analysis of strategic studies and collaboration with connected institutions and think-tanks, we had accumulated a detailed knowledge of international thinking. Through effective time spent on-the-ground networking both in Somalia and the region, we were also able to identify key players, power-brokers and regional influences working both for and against progress, and to highlight the reasons for past failures.

TOR proposed a coherent and long-term approach to Somalia involving an Africa-lead initiative based on ‘joined-up thinking’. Key building blocks first needed to be simultaneously established including strengthening of security, the development of a working economy and the creation of functioning Government institutions.

An innovative concept was proposed to progressively deny Al-Shabab influence on the ground through the establishment of concurrent ‘top-down’ and ‘bottom-up’ economic development. A key factor involved assisting and developing licit rural livelihoods in selected regions, providing a network of nuclei around which to stimulate these local micro-economies.

Ultimately, the Council of Ministers for the 8 nations, unanimously approved the outlined plan, and the Chairman endorsed this developmental framework for multi-stakeholder involvement.

View all posts by TOR International →